Three vie for school board vacancies 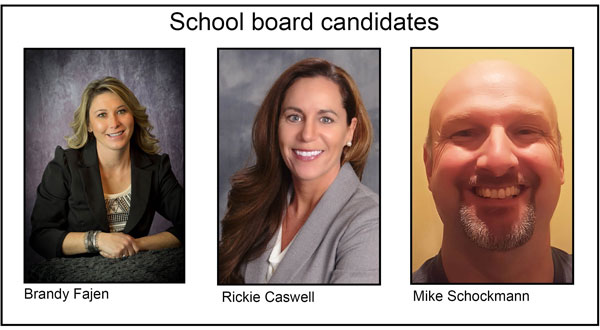 Two incumbents and one challenger will be on the April 3 ballot for school board. Current board members Brandy Fajen and Rickie Caswell will be challenged by Mike Schockmann to retain their positions on the board.

Whether they are a returning member or a brand new candidate, all parties involved have high goals and ambitions for the betterment of the Warsaw district.

Fajen currently owns a daycare center called Children’s Palace located outside of downtown Warsaw and has lived in Warsaw since 1999. Fajen has been a member of the school board for the last three years.

“If re-elected I would like to help communicate all the great things that are happening in our district. Often times, all that is spoken about are the negative or controversial topics. We have come a long way over the past couple of years and many more positive changes are to come. I feel we have some of the greatest teachers and faculty right here in our schools. If the community were aware of some of the above, they would have a different view,” Fajen said. “I am not afraid to stand up for the best interests of the district. Remember, one school board member cannot do the job alone. An effective school board member listens to all concerns and represents the faculty, students and community.”

Caswell  grew up in Warsaw and has big plans for the betterment of the district. Caswell works as the financial advisor at Edward Jones where she helps people to achieve their financial goals.

“I am best suited to be on the school board because I can make the tough decisions to help move the school district in the right direction,” Caswell said. “Changes that I would like to see in the district would be to bring awareness to improving our facilities, along with providing the staff with the right resources to create a positive learning environment.”

Caswell believes the biggest issue the district faces is the perception of it by the community.

“My wish is for the community to focus on the positive aspects that the district has been achieving by implementing new systems and attracting quality staff members,” Caswell said. “The best way to fix an issue is to be part of the solution, not the problem.”

Schockmann grew up in Warsaw and has been a resident for about 35 years now. Schockman went to college at Southwest Missouri State University and Central Missouri State, where he was a Secondary Education major. Schockmann believes that the biggest issue in the Warsaw R-IX district is the lack of participation in the community. He encourages students and parents alike to attend board meetings and leave a larger impact on the decisions that will change the district and, as a result, the education of Warsaw’s students.

“I think the biggest change I would like to see in the district is for the community to take on a larger ownership role in the district. I was at the most recent school board meeting and it was standing room only due to the large number of attendees. Every meeting should be that full because that type of participation helps to hold the district leadership accountable, which should, in turn, help point the district in a positive direction” Schockmann said. “I think the biggest issue that the district faces is a disconnect between it and its residents. In my interactions with district residents to date, the largest complaint is that people feel like the district leadership does not listen. The district draws all of its authority from the community, yet a large portion of that community feels like their voices have been marginalized.”

Schockmann has ideas on how to fix this disconnection between the community and the leaders of the district.

“I think all district leadership needs to go and meet people where they are at to give them an opportunity to express their opinions on district issues. Let’s open up a dialogue between the district and more of its residents,” Schockmann said. “Not allowing people a say in their district leads to credibility issues.”

The board will also be seeking to appoint a new member to fill a vacancy recently left by Denise Hinkle. Hinkle resigned at the January board meeting after serving two years of her term. Five candidates filed for the board position, including Amber Campbell, Tabitha Colbert, Rickie Caswell, Jeremiah Mosley, and Mike Mais. The board is reviewing applications.

Superintendent Shawn Poyser believes that the biggest issues for school districts are funding, recruiting and retaining quality staff and providing resources for staff. He also notes that the district also has a great deal of facility and maintenance issues that need to be addressed.

“We need someone who has common sense, high integrity, strong character, open-minded, team player, and hopefully does not have a self-serving agenda,” Poyser said.